By Todd Woobridge
Published on September 14, 2021

2021 is Team World’s best chance to win the Laver Cup after three years of coming close. It is a team led by the young Canadians Felix Auger-Aliassime and Denis Shapovalov.

Auger-Aliassime is now the highest-ranked player for Team World at a career-high No.11 following his recent run to the US Open semifinals and before that, the quarterfinals at Wimbledon.

He has consistently improved over the last 12 months to a level where he is now a contender for Grand Slam titles.

Shapovalov, sitting at No.12, is a dynamic shot-maker and the Laver Cup is the perfect environment for him to shine with his game style. He knows what to expect having played twice before for Team World.

Team World has three of the biggest servers in men’s tennis, all who can take the racquet out of the hand of any player in the game. Reilly Opelka, John Isner and Nick Kyrgios are opponents you do not want to see on your side of the draw if you feel any nerves or are slightly out of form.

Add to the mix one of the greatest fighters in men’s tennis – Diego Schwartzman – and you have a really well-rounded team. Schwartzman nearly won his match against David Goffin in Chicago and Shapovalov came close to victory at both Prague and Geneva against two top-10 opponents, so they know what it is like and will be highly motivated to win their first Laver Cup points in singles. Isner has pulled off some huge upsets in Laver Cup and Kyrgios thrives in this environment. They are all capable of winning singles points. 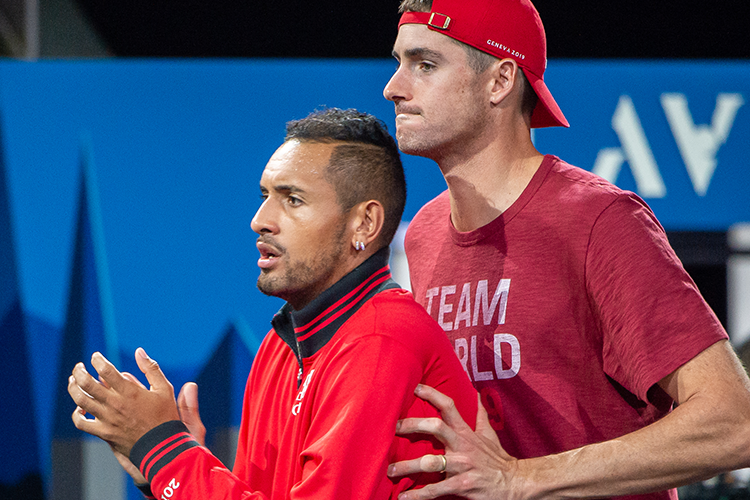 A unified team is the greatest asset you can have and Team World excels in this department. Opelka, as a newcomer, brings an attitude that Kyrgios will like, it’s a team that will bond really well together. This is not to be underestimated as a power: the team that bonds together can overpower a team of great individuals.

Team World has come so close, and with the changing of the guard in men’s tennis and a new line-up for Team Europe, this Laver Cup  will be more interesting that ever.

This is the type of event and tennis that Kyrgios likes best, having people behind him to back him and support him, but he also enjoys being that person as well. He is the great cheerleader of this competition, he gets his teammates up, he gets them relaxed, he creates an atmosphere that the crowd feeds off.

Much will again rest on the doubles and with this Team World 2021 roster you have two players who have known each other for a long time and who have played together, Shapovalov and Auger-Aliassime. This is a huge bonus.

I’d put them up in doubles on Day 1. I’d play Kyrgios twice in the doubles, first with Isner, because Isner is a class doubles player. The other guy I would love to see him play with is Shapovalov. Together they would be so hard to beat because of their shot-making abilities. Nick is great at the net. He’s very solid, he makes a lot of returns and holds his serve easily. Add Shapovalov’s flair and you’ve got a combination that will be hard to beat. They could be a Sunday doubles combo for the three pointer. That’s the match that Team World has to win to win the Laver Cup.

Each player competes in at least one singles match during the first two days of Laver Cup competition. No player can play singles more than twice during the three days. At least four of the six players must play doubles and no doubles combination is played more than once unless for the Decider on Day 3, of points are 12:12.

Read more about How it Works.