Home News Tears of happiness as Federer bows out

Tears of happiness as Federer bows out

In the small hours of the morning in a windowless subterranean room by the Thames in London, Roger Federer admitted to a fear – that he might not have been good enough.

It seems preposterous for a legend of the history of sport to harbor any such doubts, but after his doubles with Rafael Nadal, which the Team Europe pair only lost to Jack Sock and Frances Tiafoe after having a match point, Federer admitted, “I was worried I wouldn’t have the correct level.

“Several weeks ago, I said to Tony [his manager, Tony Godsick], ‘It’s 50:50 that I’ll be ready for the Laver Cup.’ Then a bit I said it was 60:40, then 70:30. I explored being on the team but not as a player if necessary, because I enjoy being with the team, but if I was to play I wanted to be as good as the others. I was afraid I wouldn’t be, but after the first game [of Friday’s doubles] I realized I’d be OK and I calmed down. It turned out much better than I’d imagined, I was surprised how well I was able to play tonight.”

Such was the race against time that provided the backdrop to the final match of Federer’s illustrious career. It was painfully clear from the last set the Swiss played in singles, his 6-0 drubbing to Hubert Hurkacz in the 2021 Wimbledon quarterfinals, that his troublesome knee that had already undergone two operations was still not right, but just four weeks short of his 40th birthday he refused to call time on his glorious playing career.

Thus began a 14-month battle to go out on his own terms. A third operation was needed, and even throughout the first half of this year he was hopeful of making a comeback. When he appeared on the Centre Court at Wimbledon in the parade of champions to mark the stadium’s centenary, he genuinely hoped to resume his singles career. The plan was to play the Swiss Indoors event in late October in his home city of Basel.

But then came the brutal realization that the knee would never stand up to the rigors of singles, and probably not doubles. Basel was out, and the obvious route was simply to announce that his career was over. But what about a final curtain call in doubles? The Laver Cup, his own brainchild conceived to emulate golf’s Ryder Cup and pay homage to the inspirational Rod Laver, seemed perfectly placed – if Federer could be fit. Heart on sleeve, Roger Federer takes in the moment.

Hence the countdown to Friday’s emotional doubles, which Federer had made clear would be his final formal match, regardless of the result or how well he pulled up from the effort. It proved the perfect farewell, and he insists the tears that flowed at the conclusion of the match were tears of joy.

By the time he walked on court, the painful work had by been done. “It was done weeks ago,” he explained to an impressive collection of the world’s tennis media who had gathered for the fifth staging of the Laver Cup. “It was hard for me making phone calls, letting people know that this decision [to retire] is happening. There I felt pain, but now, tonight was all happiness.

It was lovely for me to be on the court one more time. I’d never thought it would feel so great, and even if I cried a lot, they were tears of satisfaction. I was so happy that I could feel that way, and that I could be part of a team – I’ve always thought of myself as a team player, even if most of the time it was just me on the court.

The tears were not just Federer’s. Nadal found it very emotional, as did most of the members of Team Europe. “Andy suffered a lot,” Federer said of his team mate Andy Murray, whose two-and-a-half-hour defeat to Alex de Minaur earlier in the evening had been a remarkable achievement for a player who now plays with a metal pin in his hip. Federer’s wife, parents and children were also in floods of tears.

“When you retire, you normally do it in a small arena, or just taking the decision all alone,” Federer added. “So for me to be able to do it in such a great arena with thousands of people and so many of my principal rivals was slightly bizarre. But it touched me greatly to be there with Novak, Andy and Rafa.

“The one thing I didn’t want was to have to take the microphone. Taking the microphone is still difficult for me, and I knew it would be hard, but when I looked around and saw every second person with tears in their eyes, it’s clear it was a special moment. And many of them are people I owe a massive vote of thanks to, so it’s appropriate to say that in these circumstances whether I’m comfortable or not.”

Whatever happens in the remainder of Laver Cup 2022, it will be forever associated with the final act of a truly remarkable career. 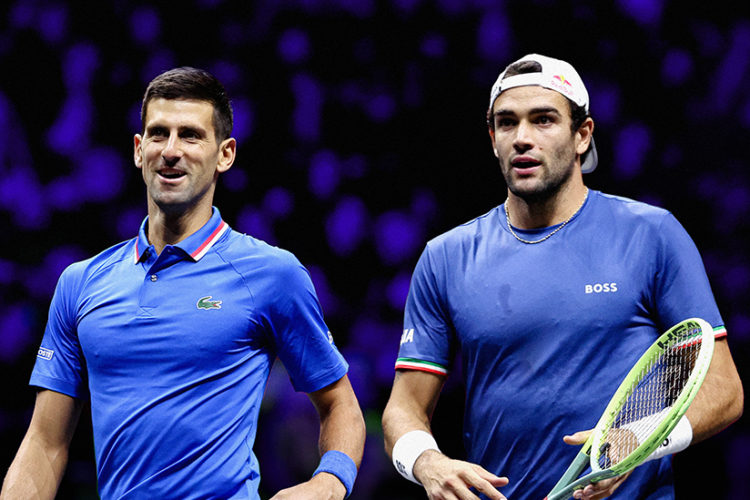