By Chris Bowers
Published on September 26, 2022

The champagne had flowed, and John McEnroe was speaking more from exhilaration and emotion than coherent thought, but it seemed totally heartfelt when he said, “This is amazing! It’s obviously great for us, and it’s great for me, but it’s also great for the event. Thank God World won, right? Even the press can agree that!”

McEnroe has been Team World’s only captain. His commitment to the Laver Cup concept, coupled with his love and respect for Rod Laver and Roger Federer, has meant he has always been comfortable in his role, even if he has – until now – not had a win to show for it. And the implication was that he would have been equally comfortable if Team World had lost a fifth Laver Cup.

But champions are motivated by the wish to win, and McEnroe reveled in his team’s first victory. “It beats losing, that’s for sure. The difference was that we kept battling. There was a great team spirit. We knew we had a shot at it, but it was an uphill battle.”

Team World came into the final day trailing 8-4, which meant it needed three of the final day’s four rubbers. By contrast, Team Europe needed just two. The visitors had to get off to a good start, and the team selection seemed a gamble. By late afternoon on Sunday, it seemed a tactical masterstroke.

McEnroe declined to take credit for the decision to play Félix Auger-Aliassime in Sunday’s first two rubbers, one in doubles in a scratch pairing with Jack Sock, and then against Novak Djokovic. “This is something that’s discussed among all of us,” he explained. “These guys know the ins and outs of what’s going to work best. Félix was ready for it, he had debuted last year, and now he was ready to step up to the big time.” 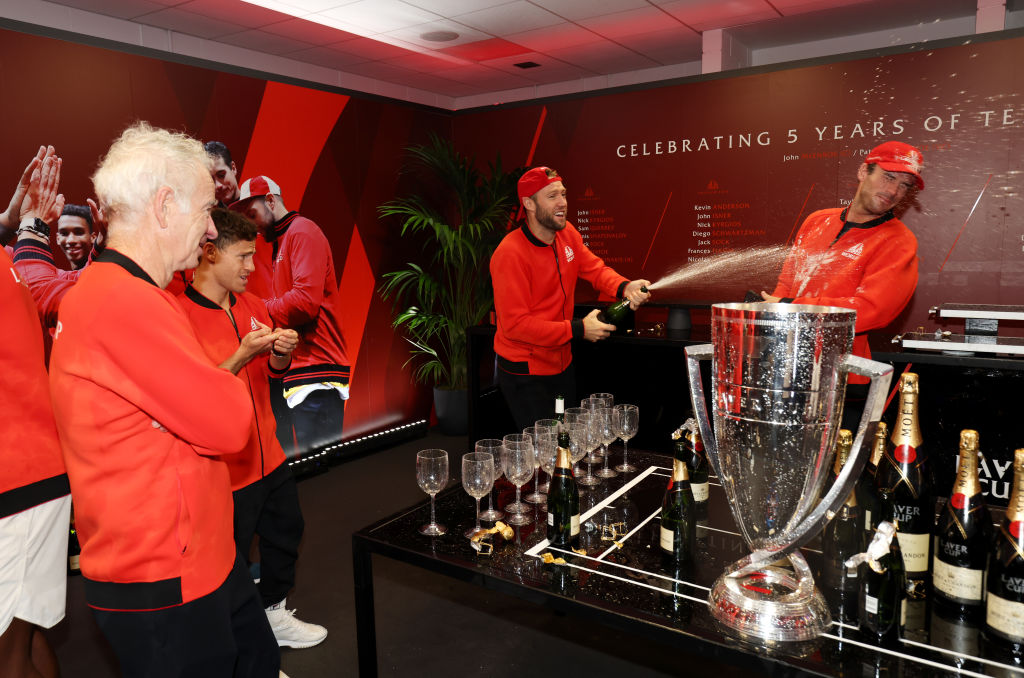 After half an hour of Sunday’s play, it was not looking promising. Sock was still not into his groove after a poor doubles on Saturday night, and Auger-Aliassime looked like he was lacking in confidence, reluctant to intercept or to punch away his volleys as Matteo Berrettini and Andy Murray pounded their groundstrokes at him.

But in the second game of the second set, the North Americans got the break, and Auger-Aliassime began to grow in confidence. He hit the high backhand volley that set up match point, and sent a perfect serve down the T to set Sock up for the volley that won the match.

The Canadian then played one of his best matches in recent months to beat Novak Djokovic. The Serb was suffering from a wrist problem, but acknowledged that Auger-Aliassime played well enough to win even without the injury.

So can the 22-year-old from Montreal turn this to his advantage on the tour? “I believe I can,” he said. “It’s been a fantastic weekend, I lost a tight one to Berrettini but I played some great tennis, even last week in Davis Cup, another team event, I played clutch for the team and played some great matches. Hopefully I can bring that kind of level to the end of the season and into next year.”

Yet it is Frances Tiafoe who has emerged as Team World’s star. Nicknamed ‘Prime time Foe’ by his mates after reveling in his peak time TV slots during his run to this month’s US Open semifinals, Tiafoe bounced back from a 21-minute first set drubbing to beat Stefanos Tsitsipas 1-6 7-6(11) 10-8 and secure the title for his team, a victory that included saving four match points.

Tiafoe is a quintessential Team World player, given that his parents immigrated to the USA from Senegal before he and his twin brother were born. He was asked where this victory against Tsitsipas rated, especially after his heroics at Flushing Meadows. “I couldn’t place it right now,” he said, “but it’s definitely up there. To do it here in Laver Cup, to win for the first time, given how bad Mac wanted it, how bad everybody else wanted it, seeing what Félix and Jack did – I thought it was just time. It was time to get it done.”

Team World’s win was historic for being the first one, but the team was keen to leave behind the sense that this is the start of something. “I got news for you,” said McEnroe at the team’s post-tournament press conference.

“These guys are going to step up big time in the future, not just here. It’s going to be incredible the next five years. Not just for Team World but for these individuals as well. I’m just so proud that I was part of that.”