Felix Auger-Aliassime had a Sunday to remember at Laver Cup and it left Team World on the brink of a stunning comeback victory.

Felix Auger-Aliassime had a Sunday to remember and it helped Team World complete a stunning comeback victory and win the Laver Cup for the first time.

Auger-Aliassime beat Novak Djokovic 6-3 7-6 (3) in London after teaming with Jack Sock for a 10-8 Laver Breaker win over Andy Murray and Matteo Berrettini in doubles.

Having trailed 8-4 heading into the final day, Team World then led Team Europe 10-8 since three points are awarded for victories on Sunday.

“One of my best wins so far, for sure, in my career,” said Auger Aliassime. “To back it up after the doubles, it was super important for the team.

“At the same time, the competition is not over.”

For Auger-Aliassime, it has actually been a last few weeks to remember in team events.

The world No.13’s maiden win over Djokovic came after the Canadian defeated new world No.1 Carlos Alcaraz in Davis Cup.

“The last two weeks I’ve had two great wins under my belt, Carlos and now here, Novak,” said Auger Aliassime, who fell to Djokovic in two tight sets in Rome in May.

“Of course personally it’s great confidence for me going forward. So I’m going to try and also understand why these wins are coming. I think that’s the main key. You can’t just think, ‘Oh, it happened, it will happen again magically.’”

Auger-Aliassime struck 39 winners, plenty with magic on the forehand. It was both stable and devastating, a day after wavering slightly against Berrettini in singles.

Djokovic had looked razor sharp on Saturday night, zipping past US Open semifinalist Tiafoe and then increasing Team Europe’s advantage in the doubles alongside Matteo Berrettini.

The evening marked his first matches since winning Wimbledon in July. But when Djokovic shook his wrist more than once against Auger-Aliassime, one could not help but wonder if he felt something. It would not be uncommon after playing for the first time following a lengthy layoff. “I’ve been struggling with my right wrist the last four or five days to be honest. I’ve been keeping it under control but the two matches yesterday probably had an effect,” said Djokovic.

“Today was not easy. I didn’t serve as fast or as accurately as I would like to and that has affected the whole game.

“He was serving extremely well. Of course not taking anything away from his performance. It was outstanding. Big serving and very solid from the back of the court so he deserved to win.”

Djokovic did get the perfect start by breaking for 1-0, however Auger-Aliassime grew in confidence in doubles after a difficult first set and did the same against the 21-time Grand Slam singles champion to put the early deficit in the rearview mirror.

A Djokovic double fault into the net leveled proceedings at 2-2, before Auger-Aliassime played one of his finest return games, blasting one winner after another to break at love for 5-3.

Trying to close out a set against an all-time great could never be classified as simple and Auger-Aliassime began with a double fault.

With Djokovic lacking his desired bite on forehands, Auger-Aliassime pounced for 2-0.

But if he played in scintillating fashion for that late break in the first set, Auger-Aliassime came unstuck when broken to love for 3-3.

The Big Three often step on the gas in such situations but it did not materialize on this occasion.

Auger-Aliassime began the tiebreak with a net-cord winner but there was no luck in officially sealing his upset, that forehand rising to the fore.

It was that type of day for Team World. 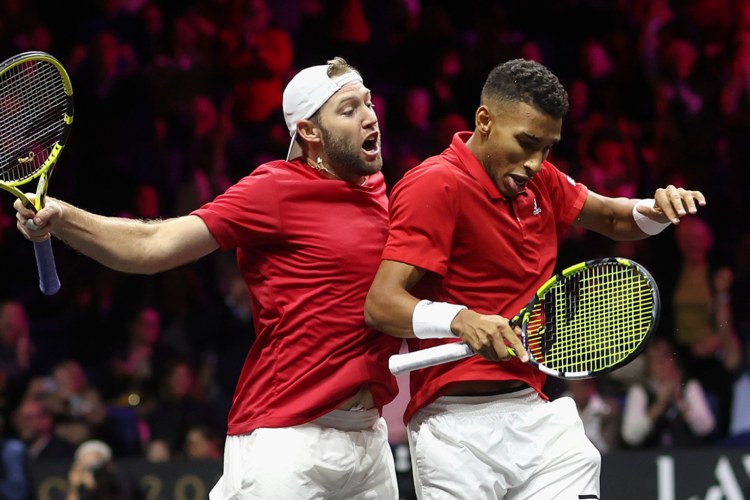