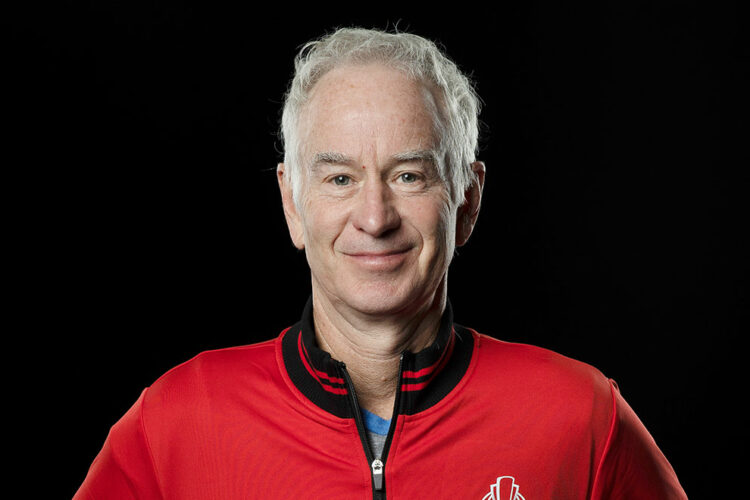 More on John McEnroe
Back to top Focus solely on what might have been in Björn Borg’s curtailed career, and you can forget the magnificence of his seven-year reign of the men’s game between 1974 and 1981 that made him, at that time, the most decorated grand slam champion of the Open era. Focus solely on Borg’s impact between the lines, however, and you miss the impact his rock-and-roll allure had on the sport in its heyday.

Borg was the original tennis hipster; the only thing cooler than his standing in the cultural firmament was his poker-faced demeanour on court, earning him the nickname the Ice Man. Tactically, the Swede was a conscientious contrarian, a fleet-footed baseliner in the age of the net-rusher, with a forehand and two-handed backhand laced with levels of topspin the likes of which had never been seen before. It was a blueprint the game we know today, and made Borg versatile enough to claim three ‘Channel Slams’, winning both Wimbledon and Roland Garros in a matter of weeks in 1978, 1979 and 1980.

While on the surface Borg was the epitome of calm, the rise of John McEnroe and the struggle of a young life devoted to tennis was taking its toll. After winning one of the great grand slam finals to claim his fifth consecutive Wimbledon triumph in 1980, his overriding emotion was relief rather than joy.

It was the first of their four meetings at the majors – and McEnroe would win the next three, twice denying Borg the U.S. Open title that would elude him in four finals. After the last, in 1981, Borg famously left the court before the trophy ceremony, escaped the stadium and jumped into a Volvo station wagon. It seemed unthinkable that, at the age of 25, his career could be over, but it proved to be his last appearance at a major. In 1983, he retired – and while there were fleeting comebacks, Borg would never again hit the heights.

Nevertheless, his legacy lives on in the popularity of the sport, particularly in Sweden. As a child Borg set himself two goals: to represent his country in Davis Cup and to play on Centre Court at Wimbledon. He surpassed both, leading Sweden to their first Davis Cup title in 1975 – the first won by a nation other than Great Britain, France, the United States and Australia.
“Winning is the most beautiful thing for a tennis player,” Borg once said. “It doesn’t matter how much you win, you’re so happy, it’s a wonderful feeling. You just feel like you’re at the top of the mountain. It’s like a dream.”

“He had this thing about him that was inexplicable. I don’t know what it is, why it is, but it is. Certain people have this incredible aura that I can’t explain without having to do anything. It’s like he got into his superman outfit.”

Borg’s match win percentage at the majors (141-16), is unsurpassed in the Open era. No player has a better record at Wimbledon (92.7) or a better five-set record (88.9). On three occasions he won majors without dropping a set, while his 41 consecutive Wimbledon wins remains a record at the Championships.

“You have to find it. No one else can find it for you.”

“If you’re afraid of losing, then you daren’t win.”

“My greatest point is my persistence. I never give up in a match.”

“I wanted to win, even in practice.”

“Sure you have feelings and you get emotional and angry but I kept everything inside because I think I still had that thought in mind – I didn’t want to get suspended again.” The New Yorker with the famous touch and infamous temper, John McEnroe is one of the most naturally gifted players to ever pick up a tennis racquet. He was just 18 and still an amateur when he burst onto the scene at Wimbledon in 1977, surging from the qualifying draw to become the youngest semi-finalist in a century before losing to compatriot Jimmy Connors.

McEnroe was a prolific serve-volleyer and said to possess the best hands in the business – something that his status as the last player to win a tournament with a wooden racquet would support – but the southpaw more than held his own with the game’s greats from the baseline. In 1979 he claimed the first of four U.S. Open titles and in 1981 the first of three Wimbledon crowns. Four major finals escaped his grasp, too – most notably at Roland Garros in the midst of his stellar 1984 season, where he squandered a two-set lead against Ivan Lendl.

No evaluation of Big Mac’s career is complete without reference to his on-court volatility –notorious enough to inspire the title of his autobiography, “You Cannot Be Serious,” a reference to his outburst following an out call during a first-round match at Wimbledon in 1981 that earned him a point penalty. Even during his unmatched 82-3 win-loss season in 1984, he served a three-week suspension for another explosion directed at the officials en route to a title win in Stockholm.

With a sparkling doubles career and five Davis Cup titles to his name, some consider McEnroe the ultimate team player to play an individual sport. But while his ability to inspire those around him was the stuff of legend, it was McEnroe’s ability to inspire himself that assured his standing among the finest the sport has ever seen.

“The greatest compliment I ever got was when people called me an artist,” he once said. “I understand that solo aspect of being an artist, when you’re in there by yourself, trying to do something great.”

“We respect each other. I respect John, he respects me. In the beginning when we started to play our first three or four matches, he felt like I was not the bad guy. We built something in tennis in a positive way. That I was part of that, I am very happy about that. We lifted tennis on a different level.”

The combined total of McEnroe’s titles in singles (77) and doubles (72), an Open era record. McEnroe’s doubles prowess cannot be overstated: he spent 270 weeks as the doubles No.1, claiming nine majors in all – seven with fellow American Peter Fleming, making them one of the most formidable teams of all time – and won his first major title in mixed doubles at Roland Garros in 1977 alongside Mary Carillo.

“The important thing is to learn a lesson every time you lose.”

“My greatest strength is that I have no weaknesses.”

“I’ll let the racquet do the talking.”